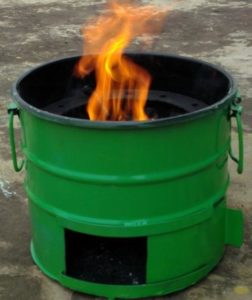 These are CookClean branded charcoal stoves which are our chore products as far as stoves are concerned. The manufacturing occurs at our own production facilities at Asofan, a suburb in Accra, the capital. They are available in 4 size 1-4 corresponding to S -XL.

The stoves consume up to 50% less charcoal than the traditional stove thus significant saving for the family.

The stoves are made of mild steel sheets with embedded pot skirt which reduces heat leakage and enables heat to be constrained close to the cooking pot for an extended section of its upward travelling path. It prevents heat from directly escaping via the stove’s sides, effectively increasing the heat contribution to the pot’s contents per mass charcoal.

The combustion chamber in which the charcoal is placed has a conical shape and is relatively small compared to the baseline stoves or Jiko type stoves.

The stove further has a sliding door enabling the charcoal to be lit more easily by allowing more air to travel through the stove, providing variable cooking speeds. Once the charcoal is hot, the sliding door can be closed so that heat can be contained within the stove and the speed at which the charcoal burns up is reduced. This allows food to be cooked more gradually, reducing risks of burning the food. On the other hand, if the user feels the need to cook more quickly, the Sliding door can be kept open to allow faster cooking.

The stoves have many unique selling propositions which others don’t have: